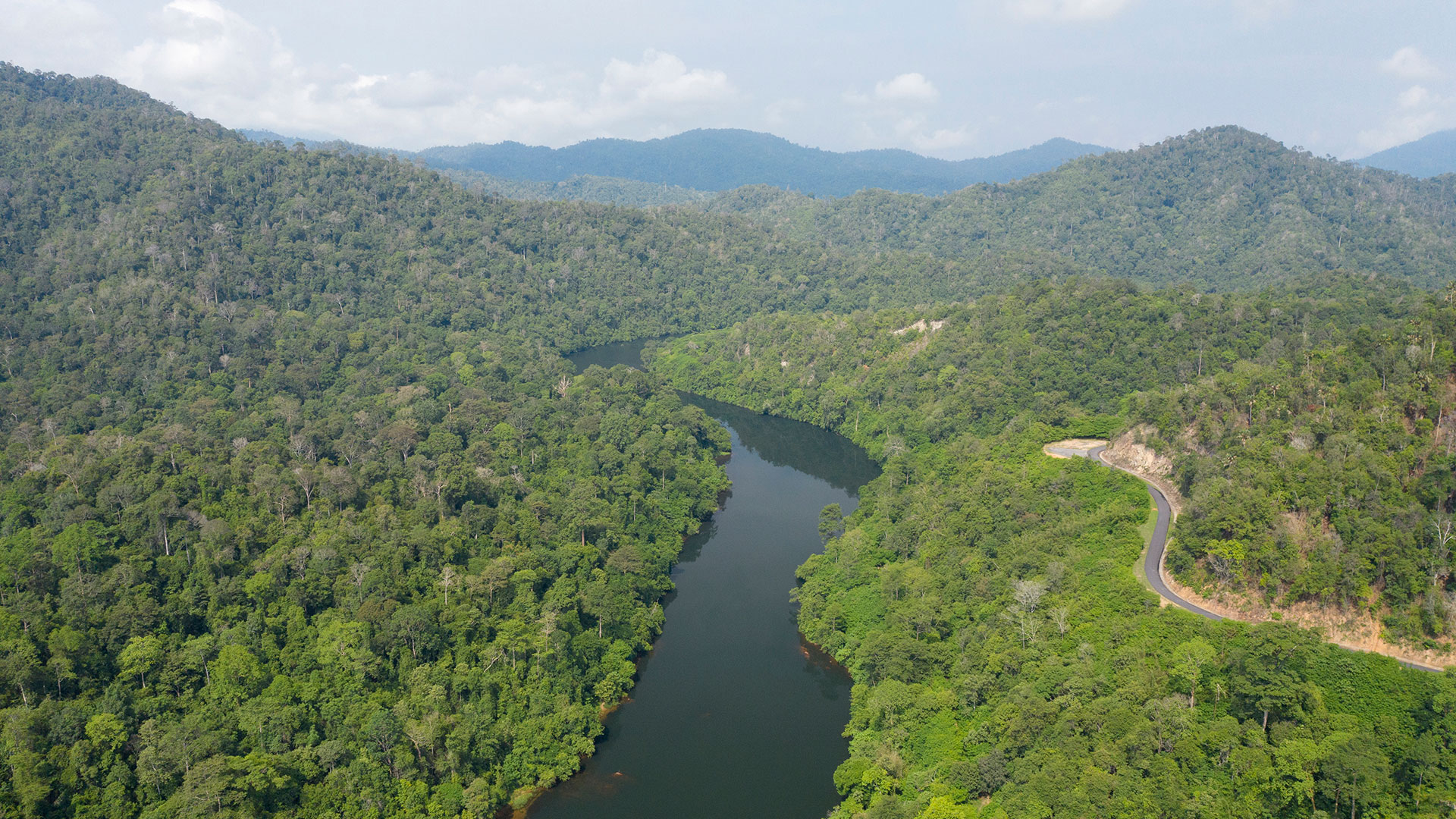 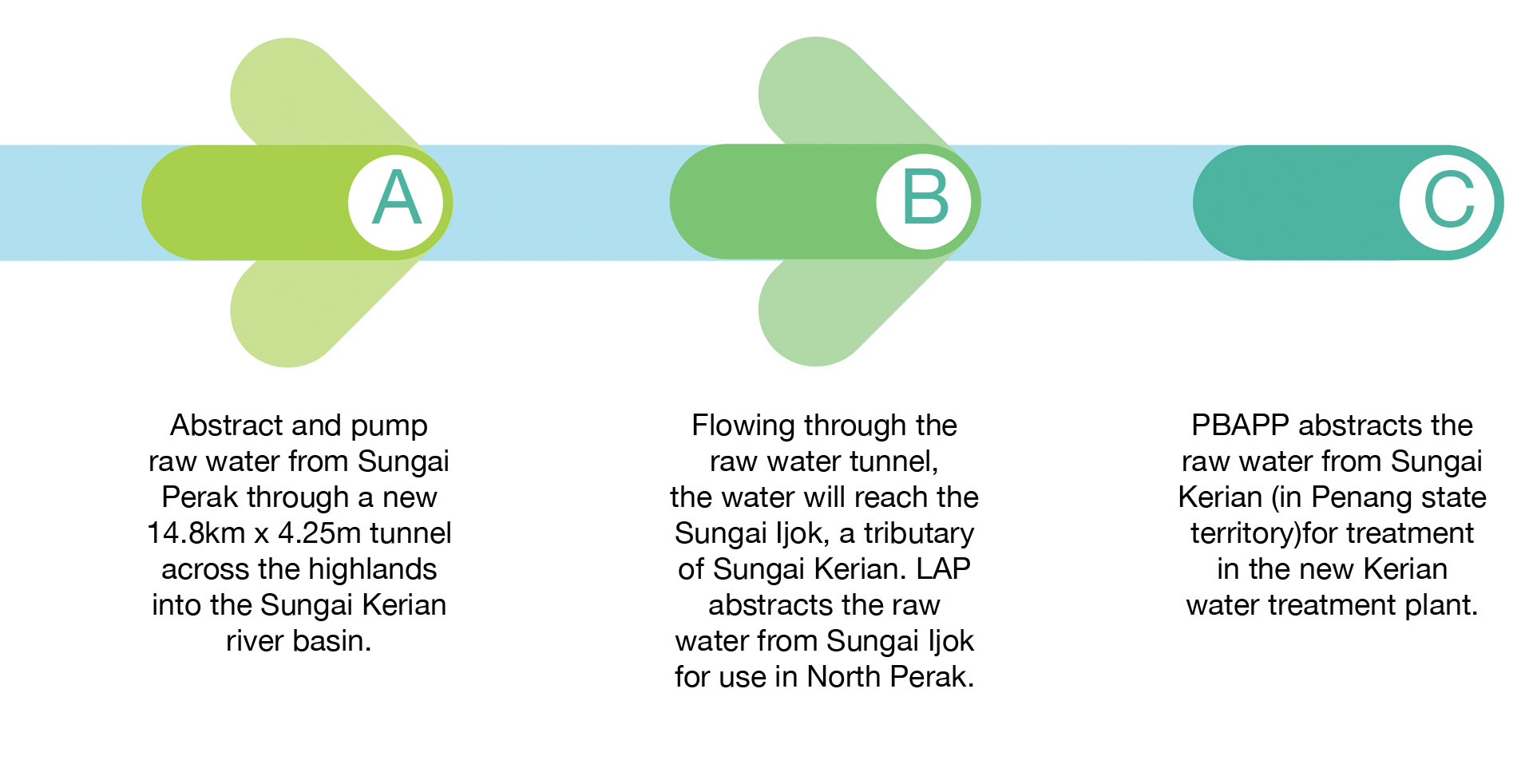 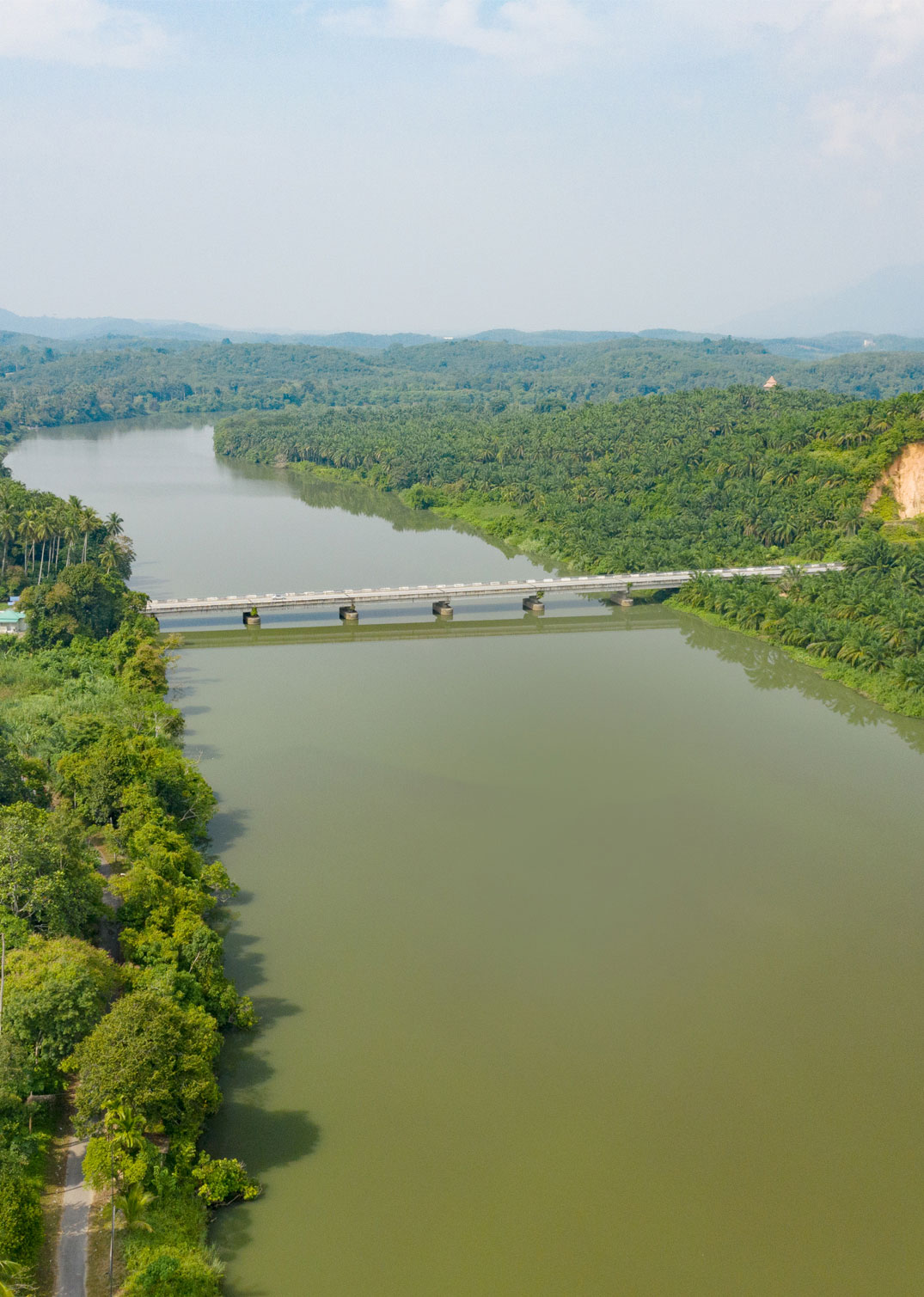 Kampung Luat in Lenggong:
Sungai Perak is about 175m wide at the bridge.

Since 2011, Penang has been pursuing the implementation of the Sungai Perak Raw Water Transfer Scheme, or the SPRWTS.

It was conceived to serve as the most rational and cost-effective solution for two states: Penang and Perak.

The SPRWTS proposes the abstraction of raw water from Sungai Perak basin for pumping through a raw water tunnel into the Sungai Kerian basin where it may be abstracted by LAP in North Perak and PBAPP in Penang.

The proposed raw water abstraction area is in Lenggong, a district in Perak which is about 80km away from the Temenggor Dam. Lenggong is located in a valley about 75m above sea level, in between the Kenering Dam and the Chenderoh Dam.

Lenggong is located in the valley wherein the 10,120-year-old remains of “Perak Man” were unearthed in 1991. Perak Man is South-East Asia’s oldest most complete human skeleton. UNESCO has listed the area where he was found, encompassing 4 archaeological sites, as  the “Archaeological Heritage of the Lenggong Valley”.

After abstraction at Lenggong, the raw water will be pumped through a new 14.8-kilometer water tunnel. The tunnel will have a diameter of 4.25 meters; and it will traverse a mountain range. At the other end of the tunnel, the water flow into Sungai Ijok, a tributary of Sungai Kerian.

Within Perak territory, the raw water may be directly abstracted from Sungai Ijok by Lembaga Air Perak (LAP), for treatment and supply in North Perak.

On Penang soil, PBAPP will abstract the raw water from Sungai Kerian for treatment in the Sungai Kerian Water Treatment Plant. This new water treatment plant will be developed in 4 phases in the period 2025 to 2050.

SPRWTS : Elevations and distances
of dams and the proposed abstraction area. 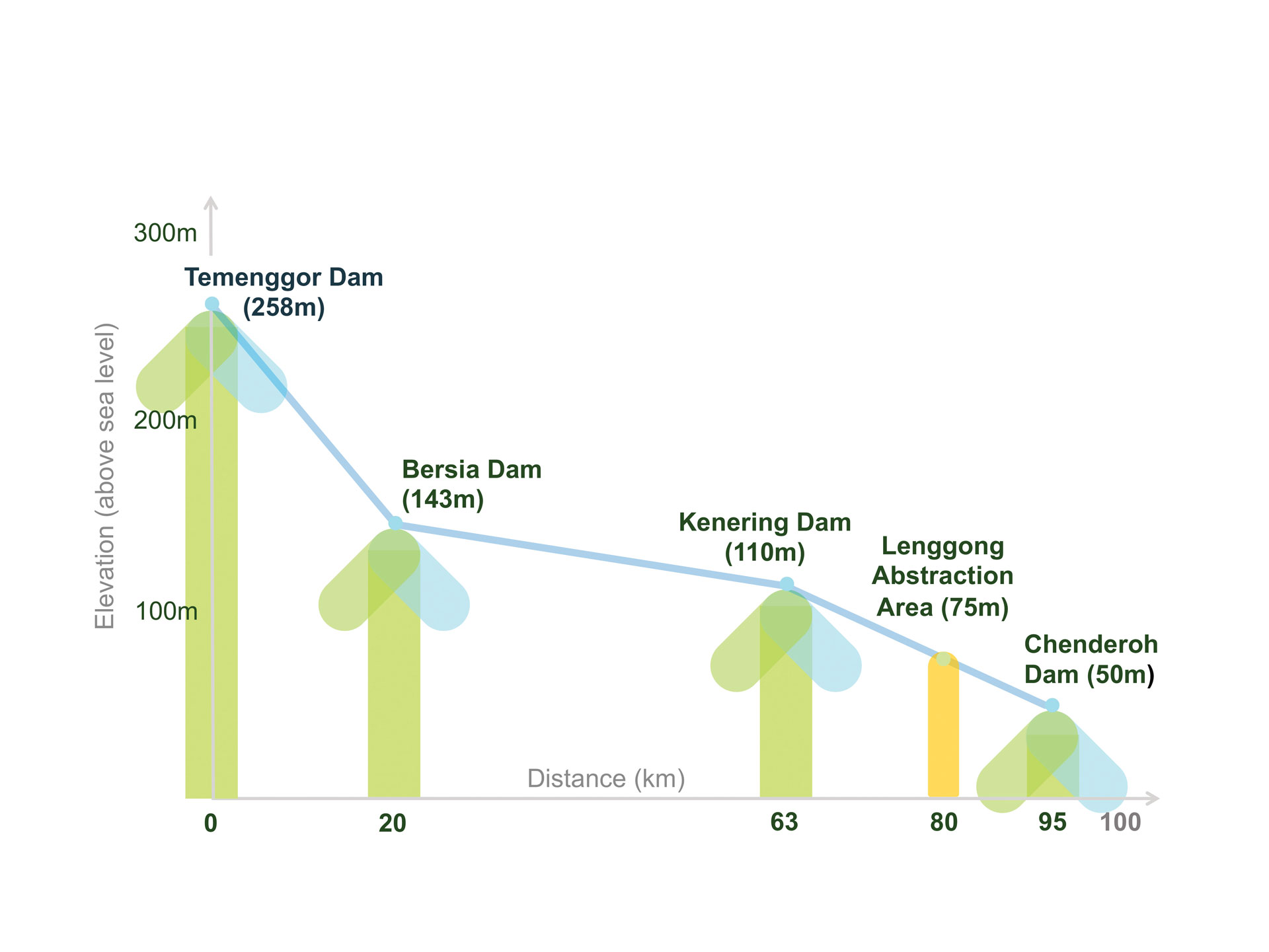 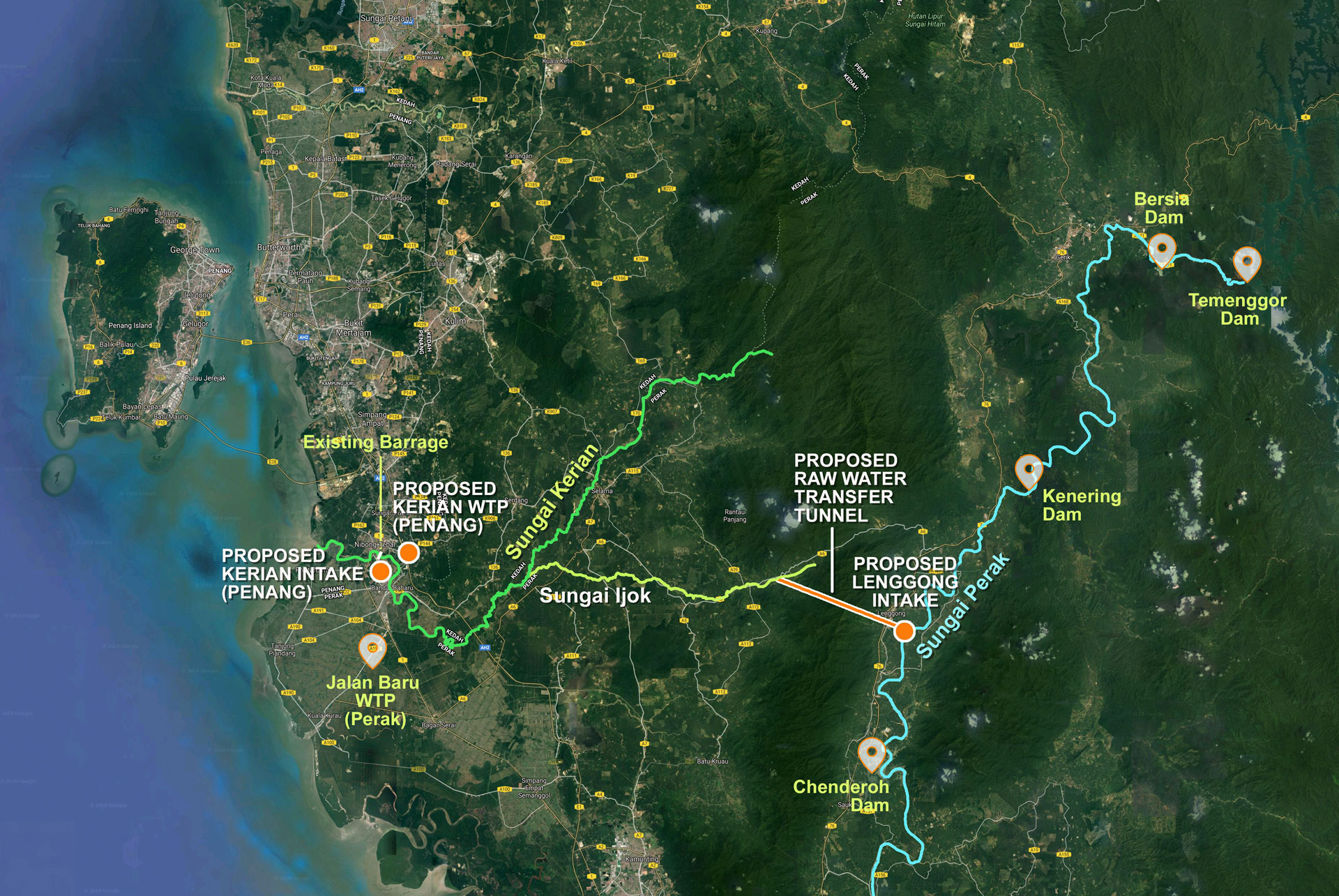